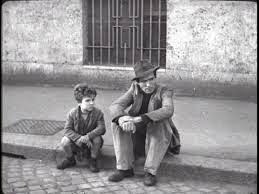 Cykeltyven
Welcome to 1948. The first film of this interesting year is “Ladri di Biciclette” or “Bicycle Thieves”, a movie whose acclaim has not gone unnoticed. This is a movie I have heard of even before I started this project, though I never saw it before now, and it has won a number of international prices including an Academy Award for Best Foreign Language Film.

I am not surprised really. This is an amazing movie

I should at this point warn that this review contains massive spoilers. If you have not seen it read no further. Do not get your experience tempered by me revealing the ending. Just go see this film, please.

Now that you have seen the film there is little point in me summarizing the plot. You know that this is essentially a film about a father and his son desperately looking for a stolen bicycle.

There is a lot of excellent stuff in this film.

The first item I noticed is how real the film is. Okay, duh, this is Italian neo-realism. It is supposed to be realistic. But “Ladri di Biciclette” takes realism to a new level. People act and talk like they would in reality. Gone is the stylized and cool dialogue or the tough guy act. These are people who act out of need and do what anybody would do in such a situation. Antonio Ricci (Lamberto Maggiorani) needs a job badly because he has a family to take care of. His wife, Maria Ricci (Lianella Carell) sacrifices the bed sheets because they are in this together and if the job requires a bike then it is essential to get it back from the pawn shop. When the bike is stolen it is just really bad luck, you cannot even blame Antonio for not locking it. He does not return directly to Maria because he feels he has let her down. This must somehow be fixed before he can face her. When she appears she is more interested in solutions than throwing up a melodramatic tantrum. This is their future as a family which is at stake.

It is this behavioral pattern that is so familiar and recognizable from ourselves that makes this film so relevant for us. In this day and age a stolen bicycle would hardly be a crisis, certainly not of this magnitude, but these characters (and the direction of course) make it very real. Frankly, when his bike got stolen I was devastated although I knew it was coming. I had to take a little break to recover.

What do you do in such a situation Antonio finds himself in? What can you really do? You can go to the police, but they could not care less. There are more important things for them to do than look for stolen bicycles. That has not changed since. Antonio does the only thing he can do, he go out to look for the bicycle himself. It is hopeless of course, Rome is a big city and in 1948 bicycles seem to be the mode of transportation. Even though he do find the thief, which is quite an achievement, it helps him zip. No proof, no bicycle, no witnesses and it is clear that the bicycle thieves are an organized lot. That bicycle is gone and so it the job that Antonio and Maria had hinged their future on.

Had this been a contemporary Hollywood production Antonio would have found the bicycle somehow, probably in some miraculous coincidence, or some other opportunity would have appeared, but that is hardly realistic, is it? What is realistic is what this sort of desperation drives a man to do. He tries (and fails) to forget his misfortune, what else is the visit to the restaurant? He hopes for some divine intervention and that is as useless as ever, and eventually he succumbs to the worst of all. Giving up his principles and become thief himself. Another devastating moment.

In all this I have not mentioned another truly amazing element to the movie: Bruno Ricci (Enzo Staiola), Antonio’s little son. Enzo was 8 years at the time of filming and Bruno is supposed to be 7-8 years old. Normally I dislike children in older movies. They tend to come about fake and staged, but not Bruno. He is absolutely adorable and more importantly, the father – son relationship is just perfectly heartbreaking. This relationship, how it works through the crisis, the respect, love but also friction is maybe even more important than the search for the bicycle. Although the movie ends on a downbeat it also ends with father and son reunited and more together than ever. When Bruno smiles I am happy. When Bruno is missing I worry, when Bruno cries “Papa” and runs to his father my heart is overflowing. That is how good this film works and why it is tearing me apart. Oh, Bruno’s disbelief when he sees his father stealing a bike…

In the extra-material  Vittorio De Sica says that neo-realism was not a conscious effort to do exactly that. The neo-realists after the war set out to find the truth, not realism. Film can never be real, but film can be true. I think there is a lot of right in that. I felt watching this film that it was true.

Bonus detail: The poster Antonio is putting up is a poster for the movie “Gilda”. Funny, but also symbolic. “Gilda” in the world of “Ladri di Biciclette” is fiction.