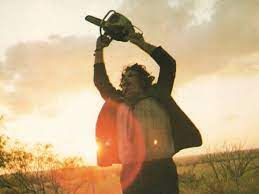 “Motorsavsmasakren”? Do I know “Motorsavsmasakren”? Of course, I know “Motorsavsmasakren” or “The Texas Chain Saw Massacre” as is its correct, original name, but I have always known it by its Danish name, which frankly sounds more awesome, at least to me. This film is an institution! Did I ever watch “The Texas Chain Saw Massacre”? ehh… no… I actually do not think so, at least not until now. But I know it, I know all the elements, Leatherface, the girl on the meat hook, youngsters getting caught by cannibals and that image of the chainsaw wielding cook running through the bush.

Why I never actually saw it, I cannot tell. It would have been the kind of thing we would have watched back at campus, but it just never came up or we just cut the line at “Evil Dead”. In hindsight that is a bit silly. “The Texas Chain Saw Massacre” would have fitted in just perfectly.

This is a movie that could easily have become one of those ridiculous movies made by amateurs by enrolling their friends, but somehow, like with “Night of the Living Dead”, the idea, creativity and energy to actually pull it off, made it work despite itself. It is realistic enough, camp enough and (certainly) barbaric enough to hit the right balance. Back in the day it moved the boundary for what you could show in a movie and were probably considered way across that line, but with just the right amount of camp it pulls back and there is something even… funny about watching the completely insane Leatherface keeping track of all these awful intruders that just won’t die, alright?

The story is that five youngsters, Sally (Marilyn Burns), her wheelchair bound brother Franklin (Paul Partain) and their friends Kirk (William Vail), Jerry (Allen Daniziger) and Pam (Teri McMinn) are on an outing in a van and stop at an old homestead belonging to Sally and Franklin’s family. They are short on gas so when Kirk and Pam spot a house, they go asking for some. As nobody answers them knocking, Kirk goes right in (?) only to meet a big man (Gunnar Hansen) with a mask made of human skin who immediately, without preamble, knocks him down with a big hammer. Pam, of course, walks in to look for him and finds some scary shit. Her screaming immediately calls Leatherface to the scene, he grabs her and puts her on a meat hook, still screaming, while he cut up Kirk with his chainsaw.

For the last third of the movie, we see Sally run through the brush, chased by Leatherface (after he quickly dispatched Jerry and Franklin), captured she is tied up with the most horrendous family ever, ready to become the evening dinner and finally fleeing again with Leatherface and his chainsaw in hot pursuit.

This is gory and violent and brutal with not much more point to it than to present a nightmare scenario. The ultimate in “don’t mess with the locals”. It should be absolutely terrible, either because of the scare or because it is so disgusting, but somewhere, as I wrote above, it is also so over the top, without breaking form, that I could not help laughing. Somewhere between the dinner party from hell and the insane chainsaw wielding Leatherface it hits a nerve of camp that is just priceless. Back in campus, in the nineties we would play Doom, the hottest thing at the time, and the most ridiculous and yet most awesome thing you could do was to take that chainsaw and run around, impotently and yet menacingly and cut up the bad guys (or each other) and as spectators we would roll around laughing watching a player run around with some chainsaw dude chasing him. And it all comes from “The Texas Chain Saw Massacre”.

The production value is not super high, this was made on a shoestring budget, the acting is, well, amateurish, but the energy! Whoah! I am not really into gory horror but this is a classic for a reason.

Do I dare recommend it?