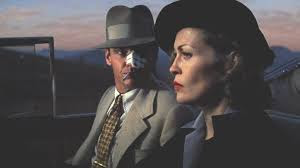 I am a big fan of film-noir. Those 1940’ies noir are just awesome, even if some of the private-eye themes are bordering cliché. The neo-noir genre tries to reanimate the look and feel of the original noirs, usually with a twist, and few does it better than “Chinatown”.

“Chinatown” is a Roman Polanski movie, the last he made in Hollywood. It recreates a 1930’ies private eye scenario in Los Angeles where the former cop, now private investigator, specializing in extramarital affairs, Jake Gittes (Jack Nicholson) is hired by Mrs. Mulwray to look into her husband’s infidelities. Gittes and his team tails him and shoots some nice pictures of Hollis Mulwray with a girl. The pictures get publicized and Mulwray is publicly crucified.

Immediately after, Gittes is approached by another woman (Faye Dunawaye) who claims she is the real Mrs. Mulwray. Gittes realizes he has been duped, but before he can find Mr. Mulwray, he has been murdered. Something very fishy is going on.

Hollis Mulwray was the Chief Engineer of the Los Angeles Department of Water and Power and clearly this goes a lot deeper than infidelities. Gittes is a character straight out of a Hammett or Chandler novel and insist on digging into it only to find out that nothing is what it looks like, and nobody are straight.

Polanski took special pains to make this look like the 30’ies and with the saturated colors and almost stylized sets there is almost a cartoonish texture to the cinematography. This is underscored by an almost perfect moody jazz score. The layered and convoluted plot where we are always caught off-balance and not entirely certain what is going on, also harks back to the noir originals.

Where Chinatown deviates from this formula are in two particular elements.

Gittes may look as if he is in control and he certainly wants to make that impression, but he is not. Everything he learns tells him how wrong he was before and though he has the audacity to get into places and obtain information others would not get, it is often too late or too little because he is missing information. He may be two steps ahead of us, like Sam Spade or Philip Marlowe, but he is also two steps behind the events unfolding. He is not an antihero, but an insufficient hero.

Secondly, the catastrophic ending. Without spoiling too much, I can say we get a spectacular ending, but not in the way you would expect. This ties in with the first exception. Gittes is insufficient and the case is bigger than him. The bad guys are overwhelmingly strong and there really is no stopping them. This moves “Chinatown” very much from the 40’ies to the 70’ies. It is a breaking of illusions and a political statement, really. Chinatown here is a metaphor for lawless corruption. Gittes tried to get out of Chinatown, but Chinatown caught up with him.

The combination of the 30-40’ies pastiche and the political implications of the conclusion makes for a strong and unique combo. I was totally sucked in, experiencing that combination of love and horror and I have to say this is one of the best neo-noirs ever. This is powerful stuff and extremely well crafted. Polanski has made a lot of great movies, and this is among his best, seriously.

Chinatown won one Academy Award (Best Original Screenplay) and was nominated in another 10 categories, including all the big ones. In a year without “The Godfather II”, it could have swept the table.