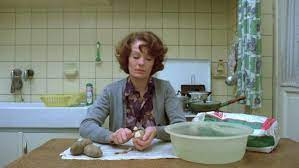 Some movies on the List have a reputation that precedes them, for better or worse, and “Jeanne Dielman, 23, quai du Commerce, 1080 Bruxelles”, or just “Jeanne Dielman” is one of those and not for the better.

Not only does this movie have a title of impressive length, it also boast a running time of 200 minutes and a pacing that may be the slowest I ever experienced. The dialogue may actually be shorter than “2001, a Space Odyssey”. To call this boring or dull would be the understatement of the year.

And yet, I did find something in it.

We, the audience, is a fly on the wall, witnessing the daily life of Jeanne Dielman (Delphine Seyrig). She lives in an apartment with her teenage son, and this is literally her life. She runs this home with military precision. Dusting, cooking, shopping, washing, eating. Everything is done precisely, completely and with a sense for the detail. Every move is practiced and correct. Tools in the kitchen each have their specific place, she wears correct protection for her cloth when she cleans, the bathtub is scrubbed after use and shoes a polished every morning. Everything is in order and correct.

Much of this is recorded in real-time, which makes it almost overwhelming in its locked and confined pattern. The one oddity is that to maintain this home she prostitutes herself. Each man has his day. He comes, does his thing and leaves. Done. Jeanne Dielman makes it look like just another house-wifey thing to do.

Halfway through the movie Dielman starts to crack. Imperceptibly at first, forgetting a few things, getting distracted. Then it seems like she is thrown off track and cannot get back in the pattern. It is as if the life she has lived so far does not do it for her anymore and in her own way she rebels against it.

This is supposed to be a feministic movie and I can understand why. Jeanne Dielman is locked in her role. Doing it to perfection brings some contentment and purpose to her, but it is also a prison and a submission, to conventions and to men, symbolized by her prostitution. It is an empty life though, as represented by the completely meaningless conversation she has with her neighbor and once she is shaken she fails to re-find any meaning.

I also appreciate the tortured slowness of the movie. Without spending this much time with the domestic chores we would not to the same extent have understood how much of a meaningless prison it is. This is not domestic bliss, but a regimen to maintain the domestic ideal. Nothing is done for the joy of it, but because it is the right thing to do.

That does not mean I enjoyed the movie. It is painfully slow, and I had to chop it up to get through it and even then I was getting nuts looking at her peeling potatoes for 5-10 minutes. This is as far from a date movie you can possibly get unless you want you date to run away screaming, but as an intellectual exercise it is a very smart movie, and it completely hits home with its message. I am actually happy to have watched it, but I do not think I would want go through watching it again.

I think there are way worse movies on the List. In fact, I think this movie deserves a better reputation.